People keep asking about how are things at the new house. Aside from a refrigerator arriving and being too large (despite our measuring beforehand), things are going well at the new home. Right now most of our attention is being focused on the old house, getting ready to put it on the market in a little over a week. That's been a little stressful and more costly than I anticipated, so there's the whole running out of money issue that makes me want to barf a little. People keep asking if it's on the market yet and I have to control my spazzy reaction. Do you know how much work goes into getting a house ready to sell in Northern Virginia? Do you know what people around here expect? Do you know what goes into creating CURB APPEAL? Do ya, do ya?. We're even getting a stager to furnish and decorate the first level. Personally I like to see a house empty and use my IMAGINATION, but apparently nobody else has imagination and it's imperative that we show them where they can put their effing sofa. Supposedly staged houses sell much faster and closer to the asking price than non-staged homes and statistics don't lie.

Last night I was feeling especially high strung, so I decided to open up the B&N package that arrived earlier and relax reading. I ordered some art and energy healing books and was excited to get them. But I didn't get them. Instead B&N sent me 5 copies of the latest issue of US Magazine. Jennifer Aniston is trying for a baby, see: 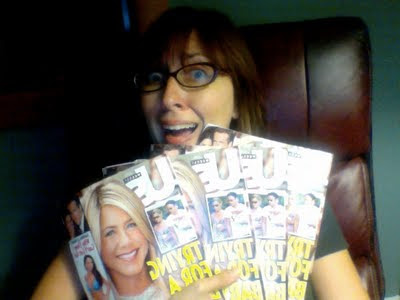 I was upset. Chris said, Oh no, now you don't have any books to read!

That was a swipe at my ten million books in the house.

Sometimes I get my heart set on something and overlook the world of other options. Maybe there was a message in the box. I'm no Jill Essbaum, but I'm trying to better pay attention to signs and messages. All last night I kept asking myself:

What is Jennifer Aniston trying to tell me?