from the Cackling Jackal Vault

Finally I came up with something that he wanted to do.

I drove him to speech camp, where they would lock him in a box if he asked to be locked in a box, but he had to be sure to ask.

(1) I double-checked with G and he's AOK with my reposting these old posts about him as long as I make it clear that these are old posts, not current ones. So note the date, people!

(2) Not sure how that one popped into my head, "locked in a box" must have been floating around in my subconscious for a while.

(4) G can and does talk now. A lot. Like so very much. Like he has to make up for early years of lost talking time. And then all the other lost years of all the other speech-delayed children of the world.

from the Cackling Jackal Vault

From 2004-2009 I had a blog called Home-Schooled by a Cackling Jackal. I closed it down five years ago and started this blog for a variety of reasons. One reason was that I was tired of writing what I felt were becoming the same recycled posts about publishing. I felt like I was in a rut and wanted to write somewhere that felt like a fresh start. I wanted to separate myself more as a writer, something I felt was overshadowed by my role as a publisher. I did that here for a little while before, like a lot of bloggers around 2010, I let things sputter out. Part of that was the growing popularity of Facebook and Twitter. Another part was that I lost my passion for blogging, much like I lost my passion for publishing. Passion is a funny, fickle thing.

Another issue was that one of my main sources of "material" was getting to an age where I needed to be more careful and thoughtful what I wrote about him. At age 6 he asked that if he didn't approve beforehand the post or picture, he wanted me to only use his initial, G, instead of his name. Fair request. I also decided that I wasn't going to write anything about him that he might consider embarrassing. He's not embarrassed by what I wrote about him as a baby or preschooler, but he's 9 years old now & current anecdotes of a more personal nature feel off limits. So while G still makes the occasional appearance or mention here, it's not the same level as before.

Luckily we now have a dog named Loki who can't read and has plenty of bowel movements to write about. 4 times a day! And yes, we're feeding him the expensive, no filler dog food recommended by the vet. That little guy is just FULL of shit. 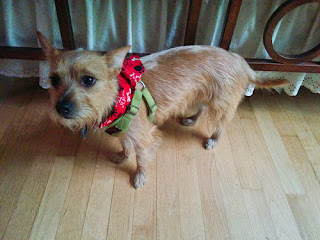 I too was starting to feel exposed and vulnerable even though I never wrote anything I wasn't comfortable sharing. It was more the position I found (put?) myself in. Despite what some people (who didn't know me) thought, I left a great deal of my life off the blog. But I suppose blogging about anything personal opens the door for some to consider you open season for whatever projected madness they come up. It started to get to me.

What I didn't recognize when I stopped blogging was how conducive it was to my own creative process. Writing regularly for an audience, no matter how casually or off-the-cuff, kept me in better writing shape. Writing just flowed better when I regularly blogged.

Anyhow, C.M. Mayo recently wrote about her 8 years blogging and included Cackling Jackal on her list of memorable blogs saying it was her "all-time fave." Even though the blog has been dormant for 5 years and for several years (until today) offline, people do still mention it to me.

So I thought it might be fun from time to time to repost here an old post from the good ole days of poetry blogging with a little commentary. I'll start with a short one:

Recently I had a conversation about how opposites were once the same thing before they split and became opposites. (2) The goal is not to pick a side, but to balance the two, let the two's strengths offset one another's weaknesses. The person I was speaking with brought up the play Wicked as an example. You gave me the book as a gift years ago.(3) I never read it because it was a novel and I'm better than that.(4) Hearing this person describe it made me feel like I missed an important opportunity. Then I remembered that I still have the book and I still know how to read. It's never too late, Sam. (5)

(1) Sam is a good friend from college. I'm not sure why, but in October 2008 I posted a series of public "Letters" to him. Probably just to be creepy.

(3) I still have, but have not read, Wicked. It's still on my to-read shelf. If I had it as an ebook, I probably would have read it by now. I don't like to hold fat books. My hands sometimes cramp when I do. I think I've fucked-up my hands with all the typing. These days I do hand stretches I learned in yoga.

(4) I read novels all the time now. I don't know what poetry-centric mindfuck I was living in, but I'm glad I left that place.

Except for Chopped. For me it falls into the same category as Project Runway. While I'm more interested in fashion than I am in food, I can't really say I'm especially into fashion either. There was a short-lived show called Craft Corner Deathmatch that I absolutely loved. What I enjoy and find intriguing about shows that focus on creative process, whatever the medium, is how the contestants (chefs, designers, artists, whatever) approach creative challenges using bizarre and unconventional materials.

Despite my disinterest in the culinary arts, I'm wildly inspired by what the chefs do with the "mystery basket" ingredients (often very challenging/unusual ingredients, especially in combination with one another). They're not just expected to use the ingredients, but to transform them. Meaning if one of the basket items is saltine crackers, you better do something more than smear a pâté on the cracker or crumble it up and call it a crouton. The chefs don't have to use all of an ingredient, just some of it. For example, if they get a whole chicken, they can just use the wings and legs. If they get an already baked cake, they can use just the icing. There's a stocked pantry and refrigerator the chefs are encouraged to use in addition to the four basket ingredients to bring the dish together. 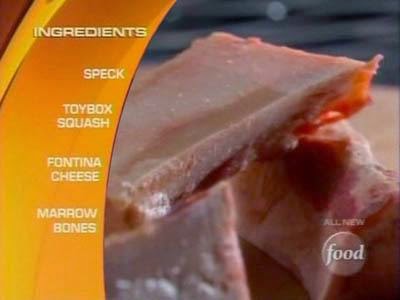 Chefs must use all four ingredients to create a cohesive dish. Excluding an ingredient is a serious infraction. Not transforming the ingredient is another. Each dish is judged on presentation, taste and creativity. Sometimes the judges will select a more ambitious dish over a tasty, but run-of-the-mill offering. If the chef gets blood on the food, the judges won't touch it.

Each judge is known for his/her preferences and dislikes. There's a judge who hates raw red onions and has a shit fit every time he's served a meal that includes them. There's another judge who freaks when too many peppers are used in a dish. That can be tricky because there's usually another judge on the same panel who absolutely loves spicy flavor. Like all art, there's personal subjectivity involved in the assessment.

The chefs who compete come from a wide-range of backgrounds from classically-trained French to food truck owners. They can cook in whatever style they prefer, use whatever tools and appliances, serve from whatever plates/bowls offered and incorporate as much or as little pantry/refrigerator items as they wish. It's all good as long as they successfully include all four ingredients.

During NaPoWriMo I followed a similar process for several of my poems. I used the Bibliomancy Oracle, but old-fashioned grab-books-off-the-shelf bibliomancy would work just as well.

Now the key is to TRANSFORM the passages (using as much or as little from each passage as you like). This means no quoting or straight-up plagiarizing lines or phrases. Transforming can mean a number of things. That might mean transforming a word or idea or emotion into something else (related or free-associated). It might mean adding on top of or deconstructing. If you don't wish to use any of the words from the passage, you can use part of the grammatical structure or style. There really aren't any limitations as long as you use something in some way from the passages and change it.

The passages will likely be very different and possibly seem incompatible with one another. It's your job to create something using all four that is cohesive and appealing (however you choose to define that).

Chopped has time limits for each round. I don't worry about time. But if you're one of those psychos who likes to write against the clock, knock yourself out.

Reading in Brooklyn on Friday

Would love to see you there if you can make it.
Posted by RL at 9:51 PM No comments: