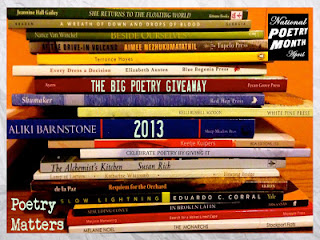 I have some extra awesomesauce poetry books, so I'll be participating in the Big Poetry Giveaway.


I'll be giving away the demented, The Moon's Jaw by Rauan Klassnik (Black Ocean) and a copy of my most recent collection, God Damsel (No Tell Books). 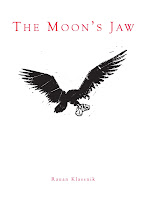 Leave a comment on this blog post with your name and email between now and April 30th, 2013 at midnight (PST).

I will pick an entry at random the week of May 1. The winner will receive a copy of both books.

Anyone, except NaPoMo Scrooge Rauan Klassnik, may enter.
Posted by RL at 6:33 PM 24 comments:

Astrologer Jessica Adams put together a list of the best free oracles and included the Bibliomancy Oracle.

At the end, she tests each oracle by asking what was Princess Diana's life about. As usual, the Bibliomancy Oracle responded like a psychic champ:


shopping for hats that convey a spirit

of adventure? You are a pizza party laughing

at toppings. You fill up this map with tiny

Since last year I’ve been using my Psychic Memoir tumblr as scratch paper for ideas/drafts for my novel-in-progress, Bombyonder. From here on out, I’ll be shifting Psychic Memoir to a more general/personal blog. During April, I’ll be posting poems for NaPoWriMo. After that, we’ll see.

I started a tumblr specific to Bombyonder here. There I’m posting a selection of reconstructed memory and historical fragments that appear in and/or influence the novel. In in some ways it’s a never ending project.

Also, the Bibliomancy Oracle is on tumblr. As of this writing, there are over 1400 prophecies. I add new ones each week. If you’re interested in following the new prophecies as I add them, you can follow that too. Or you can just go straight to the oracle and ask away.

I don't post too frequently on this blog anymore, but if you wish, you can keep up with my various online incarnations at the above tumblrs and on Twitter, Pinterest and Goodreads.

When I went on "sabbatical" last year, I decided not be on the radar as much as before. Not disappearing, just blending into the wall. The new perspective has been helpful in allowing me to better refocus my own work and personal interests. I haven't had an AWP nightmare in a very long time.


p.s. If you haven't migrated your Google Reader subscriptions yet, I've been using and recommend Feedly. After a day of getting used to it, I find that I prefer it to Reader.
Posted by RL at 10:01 PM 1 comment: