Chris, Gideon and I looked around a store to get items to help organize our house. It seems like a home store, but I bought a purse here recently. I spoke to the saleswoman. One of us commented about the Banana Republic was back in it's original spot in the mall. I had forgotten that it moved to the other (less used) end. I said that end of the mall felt like a totally different mall. The saleswoman agreed.

We moved out of our house mid-morning and into our new house. The old owners of our new house moved right next door. The man was older, shirtless with a big fat belly. I didn't like the former owners living so close to us. Our old home seemed to be nearby too. The new owners moved in. I wasn't sure for who, but for one (or more) of us these homes were a transitional space until we moved again.

I sat in a Poets and Busboys waiting for my former poetry teacher to arrive for a one-on-one meeting. I held the Poets and Busboys pencil that he gave me, still unsharpened. I remembered that he introduced me to this place before he had his falling out with it.

(Poet 1) and (Poet 2) joined me at my table. Maybe they were meeting with my former teacher too. The two poets talked about an amazing, brilliant woman who seemed to be able to do everything. She was a poet, the most alluring and sexy stripper who men relentlessly pursued, a Playboy model who drove men wild when they saw her nude photographs and now she was a conductor. She did everything except have children, which they said was because she was too smart for men. She was to be joining them soon.

Poet 1 and Poet 2 excused themselves from my table. I got sleepy and slumped over at the table as I waited for them to return. Poet 1 brought me a cup of coffee. I saw that she and Poet 2 joined this amazing woman at another table. This amazing woman had red hair, was middle aged and a little heavy. She didn't necessarily look the part, but I knew this was her. I felt left out that Poet 1 and Poet 2 left my table for her's.
Posted by RL at 10:57 AM 1 comment:

I made an announcement over at No Tells about the future of No Tell Motel. It's a time of new directions. I'm excited and hopeful about entering this new phase.
Posted by RL at 11:43 AM No comments:

We are now the owners of a fabulous new (to us) home! 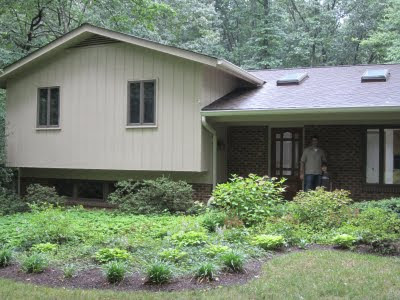 We're having some painting and kitchen work done before we move in, but this will be our residence as of July 19th. If you need the new address, backchannel.

We'll be putting our current home on the market (probably August). If you're looking for a townhouse that is both rich in poetry blog history and located in Reston, let me know. We'll offer you a very special price, just mention this blog with your inquiry.
Posted by RL at 10:19 PM 1 comment:

I was in Gideon's preschool class. I planned to work on my manuscript thesis that was due soon so I could graduate. An annoying woman came in to teach the class, so I left with my packet full of poems and notebook. I opened my slim packet. It felt like there were 30-40 poems, but instead there were smaller envelops with word games and far fewer poems than I expected. All the poems needed drastic rewrites. For the thesis, I planned to show my work (first draft, final draft) and considered writing about the changes. I had a tremendous amount of work to do in a short period of time.
Posted by RL at 12:33 PM No comments:

My poems were rejected at a magazine. Since I knew the editor, I asked him why. Another editor I knew, responded saying nobody else ever demanded a reason. I was angry at this response. I wasn't demanding anything, I just asked.

I considered my response to him. I decided that I'd never ask why? again.

As I sat in a car, a man walked by and told me that he didn't consider me an important part of American poetry these days because I don't write, I don't publish and I don't blog. I'm inconsequential now.

I told him that I didn't care what he thinks and that I moved on to something bigger and more important.

A police officer came up and handcuffed the rude man.

I asked if I could tase the rude man.

I asked if I could stick my finger in the rude man's butt.

Another man walked up and said he wanted to rape the rude man.

That crossed the boundary of a good joke.

The officer didn't think that was funny and took the rude man away.
Posted by RL at 12:14 PM No comments: