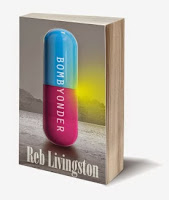 Today has been a pretty good day!

In contrast, many contemporary responses to the so-called death of the novel take the form of what is sometimes called the non-novel—works by writers such as Teju Cole, Ben Lerner, Rachel Cusk, and the aforementioned Knausgaard and Heti. In most cases these autobiographical novels attempt to solve our dissatisfaction with the stilted fabrications of plot and character by steering fiction toward the realm of memoir. But Reb Livingston's extraordinary novel, Bombyonder, shows us how timid such a solution is. One doesn't heal the ailing novel form by disguising fiction as memoir, Bombyonder forcefully suggests; one heals the novel by fearlessly transfiguring long fiction. Rather than assuaging supposed readerly anxieties, Livingston reinvents fictional character and narrative pattern while embracing the perplexities of prevarication, the imaginative value of absurdity, and the delights of wild artifice.


Despite its avant-gardism, Bombyonder bears an uncanny resemblance to Gillian Flynn’s runaway bestseller, Gone Girl. Both books feature a female protagonist trying to find herself, suppressing some aspect of her personality, and navigating complicated amorous relations with men. Both books incorporate diary entries as a central device, reflect on the questionable influence of parents on their children, and involve complex mysteries of disappearance and reappearance. And both books contemplate murder, though in radically different manners. While Gone Girl adheres to the conventions of the realistic thriller, Bombyonder teeters on the opposite end of the fictional spectrum: it is innovative in the extreme.

Learn more about Bombyonder
Posted by RL at 11:08 PM